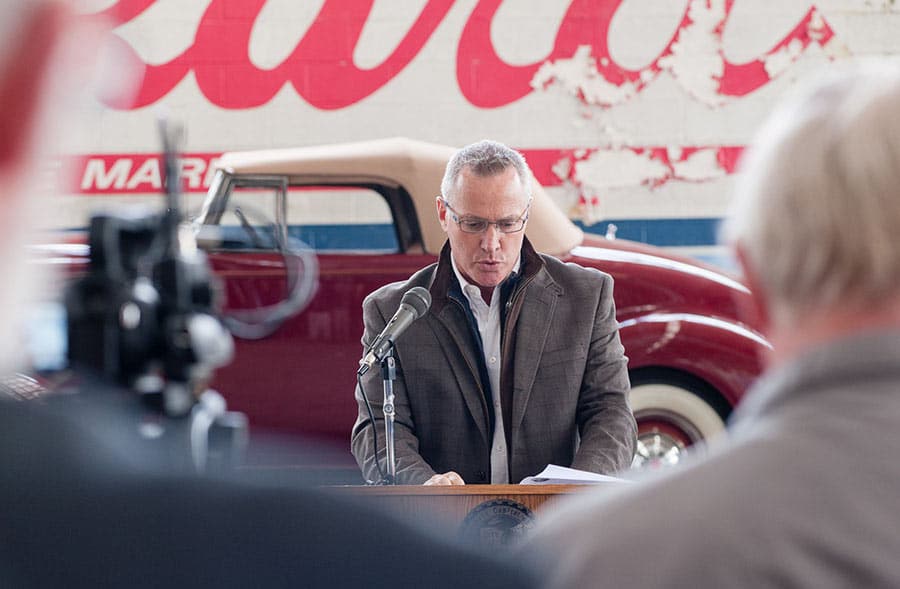 The city of Warren, OH and surrounding areas including representatives from the Governor’s Office turned out to attend Auto Parkit LLC’s news conference on the announcement to purchase 500,000 square feet of manufacturing, warehouse and office space to consolidate some operations in Warren, OH. The official news release, From Packards to Parking, is below.

Christopher Alan President of AUTOParkit™ addresses Warren Residents, State and Local Officials along with the Media

There is still a long road ahead to restore a historic manufacturing site to the economic engine it once claimed. “To make this journey possible will require the collective efforts of Warren, Trumbull County and the State of Ohio in partnership with Auto Parkit. It is not rhetoric that is necessary but actionable commitments that become implemented. We could not afford to complete this alone”, claimed Christopher Alan.

It is ironic that we are standing in this spot today to hear from a man who wants to make an investment in the City of Warren.

Ten years ago this month Delphi Packard filed for bankruptcy. But Warren is resilient and since that day we have worked very hard and have made a very conscious effort to climb back to the top again.

Over the last four years we have had many successes and have seen the positive signs that we are on the right track. But here today at the very site that was once the economic lifeblood of the city of Warren we have a project that perfectly symbolizes a transition.

And thanks to Chris this is the perfect opportunity for us…all of us… to celebrate our history while we create that future.

But most importantly we are here to celebrate a change in attitude…a change in perception that Warren is no longer a rust belt city with no future.
Warren, Ohio is now the place to be for new businesses… Warren Ohio is the place where you can experience a great quality of life for you and your family….Warren Ohio is a place of opportunity…Warren, Ohio is a place you can come home to.

And thanks to our business partners in the area… Novelis, ADM, Trumbull Industries, the Buena Vista, just to name a few, for their continued operations in the golden triangle and are set to welcome a new neighbor.

And to our partners here today…Howland, Trumbull County, MVEDC, the Chamber, Planning Commission, JobsOhio…this is also about you. Together we have taken a regional approach in our economic planning and strategy and it is working.
That’s why we are all here…and that’s why I look forward to being ‘here’ many more times in the future

Chris, you have my word as Mayor that we will do all in our power to help you succeed in Warren Ohio – not just as a reward for your loyalty to your hometown and commitment to the city – but also because your success is our success …and I promise you will not regret your investment in our community

ATTENDEES
The Invited Attendees, most of whom attended, represented by both local and state government officials and several local economic groups:

Featured in the background at the facility was a 1937 Packard. It was coordinated via the National Packard Museum by Mary Ann Porinchak. The vehicle was generously donated for the news conference by Charles & Elaine Duffield of Ohio.

From Packards to Parking
The Innovation Continues…
October 13, 2015 For Immediate Release: AUTOParkit™ a Los Angeles, CA based company specializing in the design, manufacturing and construction of fully automated parking structures has entered into an agreement to purchase a 500,000 square foot manufacturing and office facility in Warren, Ohio. The Administrative Office and Plant assembly campus formerly housed the Packard Automobile Company and later the Packard Electric Company which was eventually bought by Delphi. This move is a result of an escalating worldwide demand for AUTOParkit™’s automated systems and the company’s need to significantly increase production and warehousing capacity while continuing to improve operational efficiencies. “We currently manufacture at smaller facilities in 4 different states and have been looking for an opportunity to consolidate into a substantially larger location that we can develop into a state of the art Design, Engineering and Manufacturing Facility that will still allow for growth” explains Christopher Alan, President and Founder of AUTOParkit™. Auto Parkit (API) subsystems are manufactured off-site and then transferred to the project location during the construction phase where they are immediately erected. This process diminishes the time it takes for the course of construction as well as the space normally required for the logistics of building large scale projects. “The unique process we have developed of manufacturing subsystems offsite and then erecting on location instead of the traditional means of complete building construction onsite has helped push our business to new levels”, notes Christopher Alan.

Auto Parkit has spent the last two years performing due diligence and analyzing sites and their respective governmental authorities to find a location that meets both the immediate and future needs of the company. Future expansion opportunities are at the forefront for an API facility to allow for growth opportunities that the company has in both the domestic and global markets. Due to the sheer size of most of the subsystems rail is a critical ingredient for both raw material and final product deliveries. The Warren, OH facility potentially provides ample rail spurs and close proximity to steel producers. Christopher Alan was quick to point out that, “The current state of the facility has deteriorated dramatically which represents a significant risk to our company and without support from the City of Warren and Mayor Franklin, the Mahoning Valley Economic Development Corporation, the Western Reserve Port Authority, JobsOhio, the Trumbull County Planning Commission and the Ohio Rail Commission we could never entertain the notion of locating our future operations to Warren, OH. I have met with each of these groups along with prominent local financial institutions to explain our business plan in the hopes of moving forward here in Warren and have asked for their organization’s commitment and support. The response has been encouraging and we remain cautiously optimistic about the next step. Let me be clear, that this project is subject to securing and approval of all needed/applicable city/county/state assistance/support.”

The historic aspect of the facility did not escape the mindset of Auto Parkit’s search team. “Even upon our initial tour we were captivated by the innovation, advancements and history that this facility represents. We are excited to be part of writing the next chapter at this storied facility. Our goal is to create an extended team with the local community, finalize commitments to assist in the restoration of this celebrated factory and begin our business operations here in the Midwest”, summarizes Christopher Alan. Auto Parkit Inc. is currently performing due diligence on this property and expects to come to a final decision no later than the second half of next year.

AUTOParkit™ is a Los Angeles, CA based firm that designs, manufactures and constructs fully automated parking structures for new and existing sites that can double parking capacity within the same volume as traditional ramped concrete parking structures. Our goal is to provide parking equal to or lower than the cost of traditional ramped parking. AUTOParkit™’s sustainable approach to fully automated parking provides up to 17 LEED points; enables faster construction due to a modular /scalable design; is less expensive to operate since it is automated; is safer for the community and delivers a necessary, convenient alternative to an escalating global problem.